Badfly Claw was an elite member of the terrorist organisation known as Panther Claw. She is the first antagonist to face and die against Cutie Honey in Cutie Honey a Go Go!.

Badfly Claw resembled a cross between a leopard and a butterfly, her body was covered in spots and she wore skin tight leather trousers with white boots, she had long hair and large cat like ears atop her head with massive organic looking wings under her arms.

Badfly Claw is able to defy gravity on both her and her surroundings. This along with her wings allows her to fly for indefinite periods of time as well as telekinetically pick up large objects such as trains and cars and throw them back at the ground for large scale destruction.

Badfly is erratic and over excited, taking great joy in the destruction she causes, and laughs at the feeble attempts to stop her. She has a tendency to refer to women who stand against her as a "bitch". When drawn into battle she quickly looses her cool, with her attempts to regain it failing every time.

After Sister Jill announced the threat of Panther Claw to the world, Badfly Claw was sent out to proove that threat. She attacked Tokyo by making trains fall from the sky using her Anti-Gravity abilities across the city.

Police attempted to stop her attack though nothing seemed to work on her, with Badfly gleefully swatting bullets away. However with the sudden arrival of Cutie Honey, who enters the scene by driving into Badfly's face on her motor-cycle, the tide of the battle begins to turn. Enraged Badfly calls upon her Panthers to assist her, though they prove to serve as little more of an annoyance to Honey who disposes of them quickly. After a short fight, Honey blinds one of Badfly's eyes and rushes away in her confusion. After havign regained her senses, Badfly curses Honey's name, only for the Warrior of Love to come flying down from the sky and slicing Badfly in half, killing her. 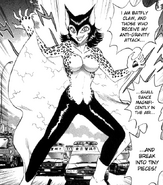 Add a photo to this gallery
Retrieved from "https://cutey-honey.fandom.com/wiki/Badfly_Claw_(Go_Go)?oldid=6922"
Community content is available under CC-BY-SA unless otherwise noted.