Start a Wiki
Black Claw is a member of the villainous group known as Panther Claw. She is the first enemy to be encountered by Honey Kisagari.

Black Claw had a skin tight body suit with fur across it, she had a literal panther's claw on the top of her hood, and on her left arms was a clawed glove.

Black Claw was a brutal aand skilled fighter able to kill at ease with her claw.

Black Claw was sent by Panther Zora to kill Dr. Kisaragi and steal the Element Fixing Device, she and several Panthers break in and destroy the lab. Honey bursts in and is attacked by them, she quickly kills the Panthers before squaring off against Black Claw. The two fight but Honey trips her over and she lands on her claw stabbing her in the stomach and killing her.

Black Claw makes a brief cameo right at the start of the story, appearing in a flashback sequence that looks over the many rougeish agents of Panther Claw that Honey had come across. 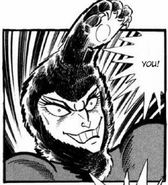 Add a photo to this gallery
Retrieved from "https://cutey-honey.fandom.com/wiki/Black_Claw_(Manga)?oldid=7196"
Community content is available under CC-BY-SA unless otherwise noted.