Start a Wiki
The eponnymous Cutie Honey disguise is the most frequently seen and used form in the Cutie Honey franchise, being the main alter-ego of Honey Kisagari. It's appeared in every series since inception. In this disguise Honey is armed with any array of weapons, including her sword the Silver Fleurette and Honey Boomerang.

Kisagari frequently transforms into Cutie Honey when fighting against Panther Claw or other enemies, often as a last case scenario after using toher disguises to get close to the ring leader or infiltrate their base.

Honey uses her gear to subdue, or more frequently kill her enemies in order to reach her goal and save the day. In the rare situation she is over powered by her opponent she will use the Airborne Element Fixing Device to create a means for her to escape or counter attack.

Cutie Honey in the anime 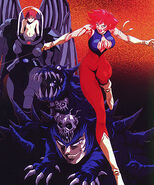 Honey in Re: Cutie Honey

Honey in the first film

Honey in Cutie Honey: The Live

Honey in Cutie Honey: Tears
Add a photo to this gallery
Retrieved from "https://cutey-honey.fandom.com/wiki/Cutie_Honey_(Disguise)?oldid=7362"
Community content is available under CC-BY-SA unless otherwise noted.