Start a Wiki
Dragon Panther is a deadly Panther Claw kaijin that appears in the second half of Cutie Honey a Go Go!.

Dragon Panther has the appearance of a preadolescent human child with long dark hair that extends to her upper back, wearing a sleeveless dress and has noticeably reptilian eyes. In her full transformation, the human form's upper body becomes attached to a giant quadrupedal dragon that features three horns on the back of the head and a horn at the end of its snout along with razor sharp teeth. The dragon form can also grow wings.

Dragon Panther is one of the more powerful members of Panther Claw second-only to the Big Four. Her dragon form, boasts incredible strength and defense, able to cleanly cut apart targets with its claws, small attacks such as swords slashes and bullets have no effect on her, and she can survive rounds from mortars and missiles that are the only thing capable of damaging her. This form can also breathe fire and grow wings for flight.

Both of her forms show a vicious killer personality that fights and kills without mercy or hesitance. Seemingly she never utters a word, throughout all of her appearances.

Dragon Panther first appeared in her human form after Tarantula Panther made a purchase with some weapons dealers to kill off any survivors and burning the meeting place to the ground so that no leads could be traced back to them.

She later appeared at the attack of St. Chapel Academy with Tarantula Panther looking for Cutie Honey. She confronts Miharu Tsuneni after she ensnares Tarantula and kills her by beheading her. Dragon Panther then confronts Honey and Natsuko Aki who points a gun at her, Dragon then assumes her monstrous dragon form to fight. Honey manages to ward her off with a mortar shell so that she and Natsuko can evacuate the students and staff. As Dragon had Honey cornered as she kept Naoko safe, Natsuko came in with a missile launcher. As armed forces approach, Dragon Panther is ordered to retreat by flying into the sky. 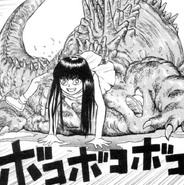 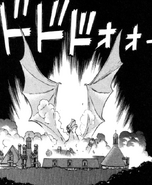 Add a photo to this gallery
Retrieved from "https://cutey-honey.fandom.com/wiki/Dragon_Panther_(Go_Go)?oldid=7232"
Community content is available under CC-BY-SA unless otherwise noted.