Start a Wiki
Fire Claw is a member of Panther Claw, she was sent to assassinate any potential threats before going after Cutie Honey.

Fire Claw resembles a young woman with a buxom figure with wavy dark hair with a pair of pins and wears a leopard skin leotard that shows her cleavage as well as dark colored elbow length gloves and boots.

Fire Claw possesses pyrokinetic abilities, able to release flames that can burn buildings down in minutes.

She is best described as a pyromaniac who is willing to destroy anything to bring out Cutie Honey. While she enjoyed showing off in front of her Panthers, she had no problems in accidentally roasting them either.

Fire Claw was sent to destroy the home of Natsuko Aki, after doing so her men spotted two witnesses, Seiji Hayami and inspector Todoroki and she gave chase. Honey arrives on a jet and distracts the pyromancess. However, Honey lost a lot of power after creating said jet, but had her energy replenished after consuming a gyudon from Seiji. This allowed Honey to transform once more, to douse Fire Claw with water. Fire Claw could not produce fire momentarily, allowing Honey to close the gap and deliver a large cut to Fire Claw's breasts, causing her to explode, resulting in her death. 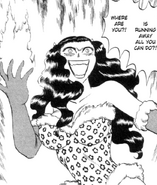 Add a photo to this gallery
Retrieved from "https://cutey-honey.fandom.com/wiki/Fire_Claw_(Go_Go)?oldid=7519"
Community content is available under CC-BY-SA unless otherwise noted.