Start a Wiki
The mechanical Robots were built by Mikio Hiruta, originally to serve as a alternate to the Japanese police force, but ultimately Hiruta decided to use them for crime instead.

The burly machine were designed by Hiruta to serve as a alternative to the current police force. However after spending many years of his life designing the robots, Mikio saw greater, criminal alternatives to the machines and began using them to commit crimes and rob banks. He even re-designed several units to host human brains, such as for the morally corrupt Muya Nagaiwa. Most, if not all were later destroyed after android heroine Honey Kisaragi got involved. 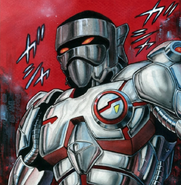 Add a photo to this gallery
Retrieved from "https://cutey-honey.fandom.com/wiki/Hiruta%27s_Robots?oldid=6925"
Community content is available under CC-BY-SA unless otherwise noted.