Hurricane Honey is the second most frequently seen form used by Honey Kisaragi, just after her main alter ego Cutie Honey. It applies her with a 1960's styled racing jumpsuit, with a helmet and scarf, just for added style.

Hurricane Honey is the form used by Honey when in need of a quick chase or speedy get away. Honey will frequently use a motorcycle as Hurricane Honey, but very occasionally other vehicles.

Her motorcycles seem to stay the same rough make, throughout each incarnation and era. 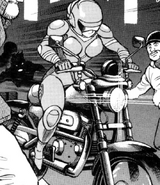 Hurricane Honey in the film

Hurricane Honey races against Dragon Panther in Honey VS

Add a photo to this gallery
Retrieved from "https://cutey-honey.fandom.com/wiki/Hurricane_Honey?oldid=7589"
Community content is available under CC-BY-SA unless otherwise noted.