Start a Wiki
Junji Ogimori is a hardcore tokusatsu fan with an obsession with real explosions and the stunt workers of characters. He went under the name the Bomber Kid, to threaten the public to bring out the actress Saori Fukazawa.

Ogimori is a young man appearing to be in his twenties, before adopting the Bomber Kid persona he wore pants, a jacket and t-shirt, baseball caps, and sunglasses. As Bomber Kid he wore a skintight suit covered in sticks of dynamite.

Ogimori is described as a otakkuru, an obsessive fan that went insane. Ogimori was obsessed with making the action scenes in certain series more realistic to the point of having the monsters with the actors in costume actually make them explode while the suit actors get caught in them. His obsession extended to the suit actor who played the Ultra Pink character, Saori Fukazawa to the point of stalking and harassment. To bring his fantasies to life, he created the Bomber Kid persona to bring the real life explosions and threaten to bring out Fukazawa.

Ogimori had taken jobs around shootings for the Ultra Rangers tokusatsu TV show. Disappointed with how the scenes are portrayed, he started to voice his insane opinions. He also started to harass Saori Fukazawa, the suit actor for Ultra Pink. To get him to stop, Fukazawa had him arrested and told him that she had a boyfriend. With this he snapped and stole dynamite from a construction site he used to work at. Ogimori caused a few incidents that got people injured.

Soon he appeared in his Bomber Kid costume causing a scene that got people killed or injured. He takes restaurant customers hostage. He sends the butler out to send out his threats to bring out Fukazawa so that they can commit suicide together. Bomber Kid then blows the butler up with the dynamite strapped to him. With the situation getting worse, Cutey Honey shows up disguised as Ultra Pink. While Bomber Kid is not fooled by the disguise, Honey begins to strip off her costume to distract Bomber Kid and get him to release the hostages.

Bomber Kid comes in to commit suicide with Honey. Honey however changed to her Rocket Man Honey form to lift Bomber Kid into the air and get out before he exploded. 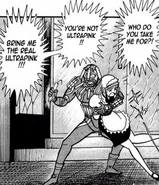 Add a photo to this gallery
Retrieved from "https://cutey-honey.fandom.com/wiki/Junji_Ogimori?oldid=6747"
Community content is available under CC-BY-SA unless otherwise noted.