Start a Wiki
Mermedusa was a high ranking elite of Panther Claw who led her own team of nautical themed Witch Soldiers. She was hand picked by Panther Zora to replace Sister Jill after countless failures in defeating the warrior android Cutie Honey. She serves as the main antagonist in the last half of the manga Cutey Honey Tennyo Densetsu.

Mermedusa had multiple forms that she altered between. Her hair consisted of a mass of moray-eels, tied back with a similar helm to Jill's. She had make up around her large eyes and dark lips. She had long nails and scaled legs and arms. One alternate form had her grow in size and form a large ferocious feline-like head, another had her grow a mermaids tail.

She had a wide array of different costumes, such as a similar dark coloured bodysuit to Jill's, a netting-like dress and a black bikini. 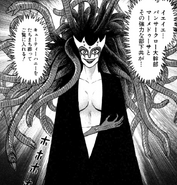 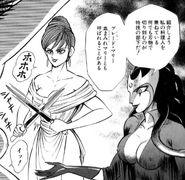 Mermedusa and her servant Blade Mary

Mermai.png
Gklass.png
Add a photo to this gallery
Retrieved from "https://cutey-honey.fandom.com/wiki/Mermedusa?oldid=7181"
Community content is available under CC-BY-SA unless otherwise noted.