Panther Zora is the leader of Panther Claw. She was an ancient powerful witch who was bent on total world domination. She was also the older sister of Sister Jill, Panther Claws second in command. In the New Cutie Honey OVA, Zora acts as the true mastermind of the events under the alias Black Maiden. 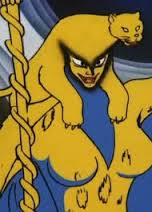 Zora was rarely seen in person, however she had yellow skin and sharp teeth. She wore a skin tight blue body suit with panther marking on it, she wore a large panther headdress which hung over her head, underneath was a long flowing cape and she carried a staff, presumably for her magic.

As Black Maiden, she possesses a black robotic body that has a feminine human shape and a pair of wings on the back. For a head, Black Maiden is an unclothed woman with short brown hair stuck leg deep in a tub. Her released state has a more buxom figure, longer hair, and a more piercing gaze.

Zora is a cruel and sadistic woman, she wants only what will profit her and her organization. She cares little about the lives or safety of others and sees her troops as indispensable, she barely seemed to care when her younger sister was killed by Honey.

Zora possessed dark and powerful spell casting, that allowed her to change people into monsters. She could cast powerful illusions that felt real. In her weakened form as Black Maiden, she had the ability to move objects with her mind.

Panther Zora has always been the leader of Panther Claw, after learning about Dr. Kisaragi's Element Fixing Device she decides that she must own it to help in her quest for world domination. She sends Panther after Panther to try and steal the Device or some other good, or at least try to kidnap Honey for herself. After the death of Sister Jill, Panther Zora was unfazed but went into hiding as the battle with Honey would continue.

Prior to the events of the OVA, Zora was defeated by Honey in battle which weakened her. A century later, Panther Zora starts the events that lead to the rampant crime rates of Cosplay City installing Dolmeck as the head of a gang that practically ruled the city while she hid away in secret as one of his henchmen named Black Maiden. When Honey attacks the airship to recover Chokkei after he was kidnapped, she fights against Black Maiden and Peeping Spider. After she was defeated, Black Maiden revealed her true identity before Honey fought Dolmeck. After defeating him, Black Maiden absorbed the souls of Honey's fallen enemies reverting a form more similar to her original self. As she is too powerful to overcome, Honey decides to seal Dolmeck's body so that Jill does not have power to draw from. With the airship crashing, Zora is nowhere to be found but her influence continues to plague Cosplay City.

Panther Zora in a message

Panther Zora in her released state
Add a photo to this gallery
Retrieved from "https://cutey-honey.fandom.com/wiki/Panther_Zora_(TV)?oldid=6865"
Community content is available under CC-BY-SA unless otherwise noted.