For other uses, see Scissors Claw.

Scissors Claw is the second Panther Claw kaijin encountered in Cutie Honey a Go Go!. She was sent to assassinate Natsuko Aki.

In disguise, Scissors Claw resembles an attractive French woman with a buxom figure, wavy light colored hair, a dress showing the cleavage with the sides exposed, a feathery boa, and high heels. After discarding her disguise, she reveals her bondage queen-like outfit that has a headband with a pair of antenna sticking out, the entire leather costume is covered in studs, spikes and chains. Her skin has some rather noticeable leopard features like spots and pointed ears. Her hands have also been replaced with large scissor blades.

In her human disguise, Scissors Claw throws pairs of scissors like throwing knives with precision to kill opponents. In her true form, Scissors Claw is able to use the scissor blades on her hands for close combat and can toss opponents high into the air. She is able to leap long and high distances as well. The antenna on her headband can release a beam at opponents. Scissors Claw retains her scissor throwing skills in this form as well. She is also able to release acidic foam from her mouth that can melt metal.

Scissors Claw has a sadistic and confident persona, preferring to have her targets die in her image of elegance and beauty which involves cutting things apart with her scissor blades. She speaks somewhat condescendingly to her enemies and dislikes being compared to a crab. Any damage to her face also makes her go off in a frenzy.

Scissors Claw first appeared at the Public Safety Bureau Office to confront Natsuko Aki as she had decided to look into the Panther Claw cases as well as get the chance to locate Cutie Honey. Bringing Panthers, they quickly overwhelm the Bureau agents. Honey arrives disguised as one of the Panthers before revealing herself. Scissors Claw then discards her disguise to fight Honey. As their fight went on, Scissors Claw threw Honey a distance away and fought her viciously. Honey adorned herself in armor to protect herself from Scissors Claw's blades. Natsuko eventually traced the two and interupted the fight with a sub-machine gun, shooting at both of them. When Scissors Claw attempted to attack Honey, she used Scissors Claw's body to block the bullets which enraged the kaijin as she spat acidic foam that melted a metal fence and part of Honey's armor. Honey changed back to her base state and when Scissors Claw was distracted, her head was cut off. Her body melting in her demise. 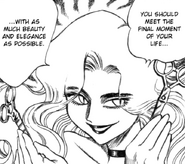 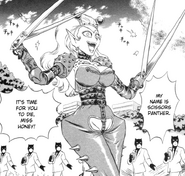 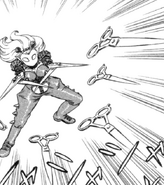 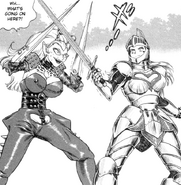 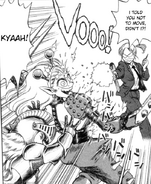 Add a photo to this gallery
Retrieved from "https://cutey-honey.fandom.com/wiki/Scissors_Claw_(Go_Go)?oldid=6975"
Community content is available under CC-BY-SA unless otherwise noted.