Seira Hazuki was a major supporting character in Cutie Honey Flash. She can transform into Misty Honey, a rival to Cutie Honey.

In her initial appearance, Seira is a teenage girl with short light purple hair and eyes. She wears diamond shaped earrings, a dark blue top, and wears a diamond ring that serves as her transformation device. As Misty Honey, she has longer and darker hair with a long yellow scarf, white gloves and boots with a red outline, a light pink top, and a blue lower half with a Airborne Element Fixing Device on her left thigh.

Seira is a cool headed person yet has a cold look on others, including a strong dislike of Honey for an unknown reason. Every time she even sees Honey, Seira attacks her as Misty Honey. Near the end, the reason for Seira's cold personality was revealed to be because of a Mark of Hatred placed on her chest by Panther Zora to create monsters from Seira's device. This same dark power was removed and remade into the clone Dirty Honey. Afterwards, Seira becomes much more open and gives her life to save Honey as well as give her the power to become Hyper Honey.

As an artificial human created with the Airborne Element Fixing Device, Seira possesses some of the same abilities as Honey. However unlike Honey, Seira's device has a minor flaw and is unable to use disguises and can only assume the form of Misty Honey which compared to Cutie Honey is much more offensive in combat. Like Cutie Honey, she is armed with her own Silver Fleurette that has a slightly different design than Honey's. Misty uses her Honey Sexy Dynamite attack by firing a beam of energy from the tip of her Silver Fleurette, causing whatever it touches to explode. She activates her device through a separate ring with the call "Honey Flash". Besides her transformation into Misty Honey, Seira is also the one who creates Panther Claw's minions. Misty also has her own version of the Honey Boomerang, but only used it once in the series.

Seira appeared in episode 14 as a transfer student at St. Chapel Academy before revealing herself to be Misty Honey, a rival and self-proclaimed twin sister of Cutie Honey who would usually fight her to a standstill. She would appear to combat Cutie Honey whenever they encountered each other. Later in the series, it is revealed that Honey and Seira were the sole survivors of a series of artificially created humans that were created to possess the Element Changing Device created by Doctor Kisaragi and Twilight Prince under Panther Claw before the doctor terminated the project. After the destruction of the incubation machine, Professor Kisaragi found and raised Honey as his own while Seira was taken in by Twilight Prince and Panther Zora. Seeing the love between a father and child even after death, however, changes Misty Honey and causes the Mark of Hatred to manifest itself as Dirty Honey; Cutie Honey destroys the clone and goes to Misty's side. Finally making peace with Cutie Honey, Misty has her device fuse with Honey's to make her stronger to form Hyper Honey at the cost of her life. In the final episode, it is revealed that Seiji and Honey named their daughter after Seira. 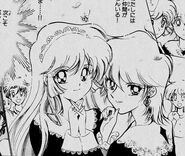 Add a photo to this gallery

Retrieved from "https://cutey-honey.fandom.com/wiki/Seira_Hazuki?oldid=7622"
Community content is available under CC-BY-SA unless otherwise noted.